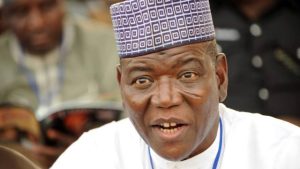 Lamido in his submission said such persons are nothing but hypocrites.

Explaining his submission, Lamido said the APC members were those who tagged Jonathan as weak and clueless when they wanted to push him out of power in 2015, so for them to want to pick him as their candidate leaves a question on whether APC does not have any qualified person to present in 2023.

The former Jigawa Governor made his view known while speaking to ARISE Television where he declared: “To me, I think that they are being merely hypocrites . They, APC governors, are looking for him, is it because there are no presidential materials in the APC? This is one of the heights of hypocrisy,” he stated.

On the possibility of contesting the 2023 presidency and the matter of zoning, Lamido explained that he believes in the ability of his party, the Peoples Democratic Party (PDP) to make the right decision, adding that he would abide with any position adopted by the party.

Lamido noted however that if the party’s position does not bar him from contesting, he may make himself available to vie for the office.

Lamido further declared during the interview that the All Progressives Congress (APC) with its bad leadership and governance has brought division, insecurity and hatred to Nigeria since it became the ruling party in 2015.

Adding that “PDP was in government for 16 years and they left behind good developments, growth and security, but with just five years of the APC, see the mess the country is in.”

He, therefore, urged Nigerians to vote the PDP in 2023 as the party that can move the country forward.

”In the next general election, the choice is before Nigerians to choose between good and bad, between the APC that is sowing division and hatred and the PDP. The choice is for Nigerians to make, not me. I’m a Pan Nigerian,” he declared.

Meanwhile, Naija News earlier reported that Lamido has lashed out at some politicians from the southern part of the country over their perceived silence on the issues of Fulani herdsmen in the country.

He noted that the silence of some of these leaders is having a negative effect on the labelling and ethnic profiling which has made some Nigerians label all Fulani herdsmen as criminals.

He added that these leaders have benefitted from the current government headed by a Fulani man but have failed to speak out in defence of the government they helped put in place, noting that their silence is criminal.