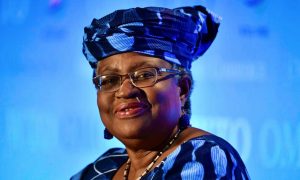 The World Trade Organization is set to appoint Ngozi Okonjo-Iweala as its first female and first African leader next week.

WTO on Tuesday disclosed that it would hold a special meeting of its General Council on February 15 “to consider the appointment of the next WTO director-general”.

This is coming after the President of the United State of America, Joe Biden, offered its support for Okonjo-Iweala, after months of hindrance from former US President, Donald Trump.

Recall that President Muhammadu Buhari on Saturday welcomed United States of America’s acceptance of Ngozi Okonjo-Iweala as the Director-General of the World Trade Organisation.

Buhari in a statement released on Saturday through his Senior Special Assistant on Media and Publicity, Garba Shehu said Nigeria and Africa are happy about the decision of the United States.

He further stated that this shows the turnaround in the relation between the continent and the US under Joe Biden’s administration.

Buhari stated this in a statement released through Shehu, titled, ‘President Buhari welcomes US acceptance of Okonjo-Iweala’s imminent WTO leadership’.