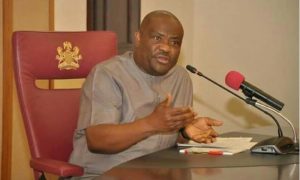 Governor Nyesom Wike of Rivers State says the reason the immediate past service chiefs failed was that they joined politics and lost focus on security situations.

Speaking on a programme on Channels Television on Sunday, Wike said the service chiefs lost the plot when they shifted their focus from securing the nation to politics.

Wike said: “Instead of concentrating on the security of the nation, the service chiefs were very much involved in politics.”

The Rivers Governor, therefore, called on the newly appointed service chiefs to shun politics and avoid the path of their predecessors.

Wike noted that no meaningful changes in the security of the nation will be seen from the new appointees if they toe the path of their predecessors.

He said the nation appreciates the change of service chiefs, but warned that the issues do not end at the exchange of baton.

He said: “This was the problem we had with the previous chiefs, they were involved in politics rather than face the security of the nation.

“Nobody can deny that fact; the moment you politicize security, then you are bound to have problems.

“The new people that are appointed must ask themselves, what is our agenda? Is our agenda to continue with where the last service chiefs stopped, or to make sure we improve?”