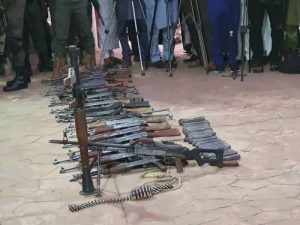 The alleged mastermind of the abduction of Kankara schoolboys, Auwalun Daudawa, has revealed why he repented and surrendered his arms.

Speaking after taking an oath of repentance on Monday at the Zamfara Government House in Gusau, Daudawa said he accepted the surrender his arms and ammunitions because of the sincerity of the state governor, Bello Matawalle.

The bandit leader said he was convinced by the state government’s approaches to peace reconciliation with armed bandits in the state.

Daudawa stated that said his gang voluntarily surrendered and was not forced to accept the amnesty granted to them by the governor.

He added that his lieutenants are not seeking money from any individual, group, or government, saying that his gang surrendered 20 AK 47 rifles, ammunition, and a rocket-propelled grenade (RPG) launcher.

“We have voluntarily repented and sought no single kobo from any government, group, or individual for that,” he said.

“I was convinced by the state government approaches on peace reconciliation with armed bandits, I learned from those repented before me that, there was not single plan by the governments through use of security agencies to harm me and my boys, therefore, we are now back for normal lives like other peace-loving Nigerians.”

Speaking, Matawalle said the development is a result of his administration’s efforts to ensure that there is peace in Zamfara.

The governor said his administration is working to ensure that farming and cattle rearing would be the only activities in the state’s forest.

“The development will not only gradually paste the name of Zamfara unto the list of most peaceful places in the country, but will facilitate the return of the lost commercial enterprising to the state,” he said.