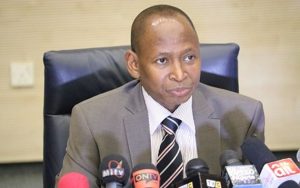 The Minister of Labour and Employment, Chris Nigige, has revealed why President Muhammadu Buhari retained Ahmed Idris as the Accountant-General of the Federation despite attaining the retirement age.

Naija News reports that there have been calls by labour unions asking Idris to immediately leave the seat and proceed on retirement after turning 60 in November 2020, which is the mandatory age for civil servants.

Speaking to State House correspondents on Friday, after a meeting with the President, in Abuja, Ngige said the reason Buhari retained Idris was that he has the constitutional powers to do so.

The minister added that President Buhari has not broken any law by retaining Idris as the AGF, saying the calls by the labour unions were unnecessary.

He noted that the President has exercised his powers under Section 171 of the 1999 Constitution as amended in reappointing Idris as the AGF with effect from June 25, 2019.

Ngige said: “There are other issues, all related to labour again, which I have to seek further information from Mr. President, like the reappointment of the accountant-general of the federation, which the Trade Union Congress and the affiliate, Association of Senior Civil Servants, have drawn our attention to the fact that having clocked 60 years, that the man should exit.

“We have had two meetings on that and I have educated them that the 1999 constitution, the supreme law of the land, is the grand norm, all other laws rose from it and any law that is in conflict with the provisions of the constitution doesn’t stand, it’s struck down.

“Therefore Mr. President has exercised his powers under Section 171 of 1999 Constitution as amended in reappointing Mr. Ahmed Idris with effect from June 25, 2019, not even today. So the man has a tenure of four years which by terms of appointment elapse June 2023.

“I have made it clear that the issue of accountant-general of the federation is a constitutional issue. The appointment is predicated on section 171 of the constitution of 1999, as amended. That section is an omnibus section that grants the president powers to appoint those he thinks that he can work with and those offices were so listed.

“When those appointments are made and you are serving there and the President feels he can work with you, 171 protects him because he is not working for himself, he is working for the nation and he has to get the best of hands, trusted persons. So the Office of the Accountant General of the Federation is a sensitive position that deals with financial issues and he feels, and very rightly too, that this is the man that has been there, he is doing a good work and he wants to continue with him.”