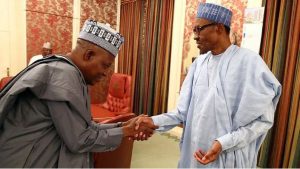 The Senator representing Borno Central, Kashim Shettima has commended the choice of the new service chiefs appointed on Tuesday by President Muhammadu Buhari.

Shettima, a former Borno State Governor noted that the new service chiefs are conversant with the activities of the Boko Haram terrorists, having served at different times in Borno and shouldn’t have problems dislodging them.

He made his mind known while speaking on Thursday in Maiduguri, the Borno State capital where he reacted to the change in the nation’s service chiefs.

It will be recalled President Buhari on Tuesday, named Maj Gen LEO Irabor as the Chief of Defence Staff (CDS), Maj Gen I Attahiru as Chief of Army Staff (COAS), Rear Admiral A Z Gambo as Chief of Naval Staff (CNS), and AVM I O Amao as Chief of Air Staff (CAS).

In his reaction to the development, Shettima, who had been one of the loudest voices calling for the sack of the previous service chiefs, noted that “The President made a well-informed decision. I have interacted with some of them and I can attest to the character and professionalism. General Leo Irabor (the chief of defence staff), is one of the finest officers the Nigerian army has produced in recent times. Rear Admiral Awwal Zubairu Gambo who is the Chief of Naval Staff had served here in Borno and so has General Ibrahim Attahiru (the new chief of army staff) who was also in Borno for a brief period.

“We all know that depending on the situation General Attahiru might have met on ground as theatre commander back then, there is always a difference between when someone is working under another and when he is in charge. Today, he is chief of army staff who heads the Nigerian army.

“This appointment provides an opportunity that will insha’Allah prove General Attahiru’s leadership credentials and I believe that insha’Allah he will succeed. The success of all the service chiefs is in our best interest as leaders and as people of Borno.

On his insistence on the sack of the now out-gone former service chiefs, Shettima noted that the calls were nothing personal but for the greater good of Nigeria as a nation.

He disclosed that he has personal relationships with some of the former service chiefs but it was clear they needed to give way for Nigeria to make progress in the fight against Boko Haram and other insurgents.

“There was nothing personal in our calls for the change of service chiefs. For instance, the former chief of army staff, General Tukur Buratai, we both grew up in Maiduguri, we attended the same primary school and the same University.

“The former chief of air staff, Air Marshall Sadique, we even have marital affinity but the issue goes beyond our personal interests and affiliations, it is about our survival as a people and no one can take away the fact that these service chiefs made contributions to Borno’s fight against Boko Haram and Nigeria’s fight with bandits and other criminals. We really wish them the very best,” Shettima said.

Meanwhile, the leader of the Boko Haram Terrorist group, Abubakar Shekau has reacted to the appointment of new service chiefs by President Muhammadu Buhari.

The Boko Haram factional leader in the nine minutes, 56 seconds-long clip mocked the newly appointed military chiefs, telling them they can’t perform better than their predecessors.

He called on those of them that are not Muslims to convert to Islam and warned those who are already Muslims not to think they will be able to do anything against him because their own version of Islam is ‘fake.’