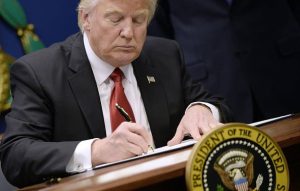 Recall that Bannon had being charged with defrauding people over funds raised to build the Mexico border wall that was a flagship Trump policy.

“President Donald J. Trump granted pardons to 73 individuals and commuted the sentences of an additional 70 individuals,” the White House said in a statement on Wednesday.

According to AFP,  the president — who will leave office on Wednesday — made his last-minute decision after speaking to Bannon by phone.

The pardon would effectively wipe away charges against Bannon, if he was convicted, it said.

The batch of 73 pardons and 70 commutations issued in the final hours of his presidency was expected and is in keeping with a long-standing presidential tradition of exercising clemency powers at the last minute.

The vast majority of the pardons and commutations on Trump’s list were doled out to individuals whose cases have been championed by criminal justice reform advocates, including people serving lengthy sentences for low-level offenses.

But several controversial names do appear, including Steve Bannon, who has pleaded not guilty to charges he defrauded donors in a “We Build the Wall” online fundraising campaign. T

During his final hours in office there was a frantic debate underway behind the scenes on whether to grant Bannon a pardon, CNN reports

One concern was Bannon’s possible connection to the January 6 riot of Trump supporters at the US Capitol, according to a source familiar with the discussions.

Over the course of Tuesday, Trump continued to contemplate pardons that aides believed were settled, including for his former strategist. The President continued to go back and forth on it into Tuesday night, sources told CNN.

Other names included Tuesday were Elliott Broidy, a former top fundraiser for Trump’s campaign who pleaded guilty to one count of conspiracy relating to a secret lobbying campaign to influence the Trump administration on behalf of a foreign billionaire in exchange for millions of dollars.

The rapper Lil Wayne received a pardon after pleading guilty to a gun possession charge in Miami. Another rapper, Kodak Black, received a commutation after he pleaded guilty to a weapons charge.

Bob Zangrillo, the Miami developer and venture capitalist charged in the Varsity Blues college admission scandal, also received a pardon. None of the other parents caught up in the probe were pardoned.