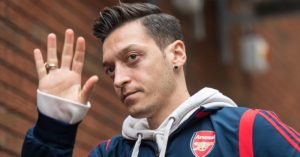 Arsenal playmaker, Mesut Ozil, has confirmed his plan to leave the Emirate for Turkish side, Fenerbahce.

The Germain has being frozen out of the Mikel Arteta’s team for months.

Ozil during an interview with Turkish television channel NTV said, “I’m very happy, very excited. God has given me the chance to wear the Fenerbahce shirt. I will wear it with pride and give everything for the team.”

In a related development, Inter Milan striker, Romelu Lukaku, has become a target for Manchester City, who will invest £200 million in their squad in several areas at the end of the season.

Pep Guardiola’s men sit four points behind leaders Manchester United with a game in hand, ahead of their match with Crystal Palace on Sunday.