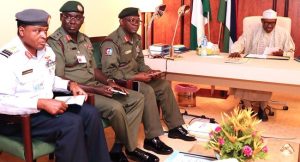 The Presidency has lambasted the Peoples Democratic Party (PDP) for rejecting the recent nomination of former Service Chiefs as non-career ambassadors by President Muhammadu Buhari.

In a statement on Saturday, the Senior Special Assistant to the President on Media and Publicity, Garba Shehu, asked the main opposition party to stop defaming the ex-service chiefs.

The presidency dismissed PDP’s position that the former service chiefs were nominated as ambassadors so as to shield them from trial by the International Criminal Court (ICC).

The statement read, “How on earth can decent people run down hardworking professionals who have put in their best to defend their country? How can you run down your country and equate that with normal political dialogue and opposition?

“What is baffling about this false and baseless assertion is that this is coming, not from Boko Haram terrorists who the military kept largely in check and confined to a known section of the country, Sambisa, but from a so-called leading opposition party that fraudulently kept power for 16 years and is nursing the hope of one day returning to office as an elected government.

“What is more, under these corrupt politicians the insurgency conquered large swathes of territory-18 Local Government Areas.

“Pray, if a political party, in a blind search for power can spurn the interest of the nation, embrace the language of hate campaign against the country’s military as enunciated by the terrorists, as the PDP does, what will be left for the Boko Haram to do? PDP is doing Boko Haram’s work!”

The PDP added, “To add, we don’t think the ICC, which these childish calls are being made needs to be lectured on democratic values and human rights by the PDP. Who are they, and what is their record in office to lecture anyone? Zaki Biam and Odi where thousands of citizens were on record, the genocide operation comes to mind. Did they report themselves to the ICC?

“PDP’s attacks on the ambassadorial nominations should be seen in the context of the opposition party’s track record as a university of liars, whose modus operandi is to propagate lies.

“The President is rewarding hard work and exceptional sacrifice by a set of military leaders who gave their best to the nation and will be remembered, sooner than later, for their contributions to the security and survival of Nigeria as one nation. They should be allowed to move to the next level.”