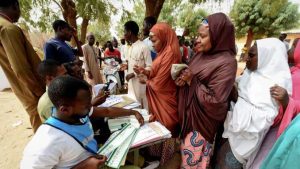 The Senate Committee on the Independent National Electoral Commission (INEC) matters, on Tuesday, February 2 threw away suggestion for married underage girls to have voting rights.

Kabiru Gaya, chairman of the Senate Committee while answering questions from newsmen in Abuja today, said the committee has resolved that any woman under the age of 16 can not be allowed to vote even if she is married.

He noted that a group had submitted a memorandum, clamouring for the enablement of married under 16 girls to vote.

“One of the people who came to the public hearing submitted the memorandum, and argued that the word underage was not his, but that any woman or man that is married should be considered as an adult,” Gaya noted.

“That was his reason. Our own resolve is that if a woman is at the age of 16 and she gets married, she should not be allowed to vote,”

“But when we came to the committee, we discussed a lot on that and at the end of the day, we felt we could not go along with that suggestion and it was dropped,” he reiterated.

Speaking about the suggestion for elections not to hold again on Saturdays, Gaya said that same argument will come up if any other day is fixed for elections.

Meanwhile, Lagos State House of Assembly in the leadership of Mudashiru Ajayi Obasa, the house speaker, has passed a bill to punish parents of convicted cultists in the state.

Naija News reports that the ‘Unlawful Societies and Cultism (Prohibition) Bill 2020’ was forwarded to Governor Babajide Sanwo-Olu on Monday, February 1 for his consent.