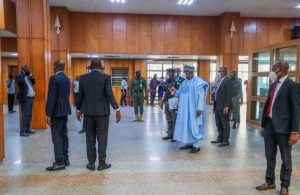 President of the Senate Ahmed Lawan on Wednesday tackled legislative aide for failing to wear facemask inside the National Assembly complex.

Naija News reports that this was made known in a statement by Lawan’s Special Assistant on Press, Ezrel Tabiowo.

He disclosed that the Senate President was entering the National Assembly Complex when he spotted the aide (name withheld), standing at the lobby without a facemask.

According to Tabiowo, the Senate President upon seeing him, stopped and rattled him for not wearing a facemask, “where is your facemask,’’ he said.

“The legislative aide who was not expecting the question, mumbled, it is in my pocket, sir, while making frantic effort to retrieve his facemask from his pocket,” he said.

He added that Lawan watched as the aide tried to reach for his facemask, and thereafter, proceeded to his office.

Meanwhile, the Senate has okayed President Muhammadu Buhari’s nomination of Ahmed Lawan Kuru for reappointment as the Managing Director of the Asset Management Corporate of Nigeria (AMCON).

Naija News reports that the senate also confirmed the reappointed of Eberechukwu Uneze and Aminu Ismail as Executive Directors of AMCON.

The Upper chamber approved the nomination after receiving a report from the Senate Committee on Banking, Insurance and other Financial Institutions, chaired by Senator Uba Sani (Kaduna Central).

Lawmaker on Wednesday approved the recommendations of the committee during a voice vote presided over by Senate President Ahmad Lawan.

The Senate also approved the nomination of Bello Hassan and Mustapha Mohammed Ibrahim for appointment as the Managing Director and Executive Director respectively of the Nigerian Deposit Insurance Corporation (NDIC).