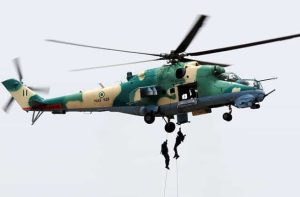 This was made known in a statement by the state Commissioner, Ministry of Internal Security and Home Affairs, Samuel Aruwan.

According to Aruwan, the air raid was conducted after armed reconnaissance over Kaduna forests. He added that the military has eliminated several bandits after it bombarded forests in Kaduna state.

Others are Ungwar Yako, and its connecting track to Kuduru, Kaduna-Birnin Gwari Road all of Birnin Gwari, Chikun, Igabi, and Giwa local government areas.  Troops at Dogon Dawa and Sabon Birni reported a calm situation with no suspicious activity observed.

In a subsequent mission, two bandits were neutralised as they tried to escape the notice of the fighter jet crew at Maganda.  This is coming as ground troops reported bandit activities at Gatarawa, close to Rumana.

This incident is coming after the military eliminated several bandits after it bombarded their meeting venue in Kwaimbana forest area of Kaduna state.

This was disclosed by the Defence Headquarters through the coordinator, Defence Media Operations, Maj.-Gen. John Enenche, on Friday, September 18.

According to the DHQ, the Air Component of Operation Thunder Strike was on target on Thursday, September 17.