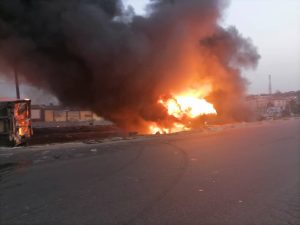 Two armed robbery suspects were on Sunday burnt to death by residents of the Tolu area of Olodi Apapa in Lagos State.

Naija News gathered that the two armed robbery suspects were caught on Bale Street on Saturday and were immediately set ablaze by irate youths.

A police report from the Tolu division obtained by SaharaReporters confirmed that one of the burnt robbery suspects was identified as Monday Okunomo while the identity of the other remained unknown as of the time of this report.

“At around 3pm, information was received that two suspected armed robbers were caught and set ablaze by some boys at Bale Street, Tolu. Policemen mobilised to the scene and met the corpses still burning. Immediately the boys sighted the police, they took to their heels.

“The photographs of the burnt corpses were taken and evacuated to the Mainland General Hospital mortuary, Yaba, for an autopsy. Effort is ongoing to track and arrest the perpetrators,” the police report partly reads.

Operatives from the Tolu police division and the Area B command were currently searching for those who carried out the act. Also, more police detectives had been patrolling the area in order to fish out the perpetrators