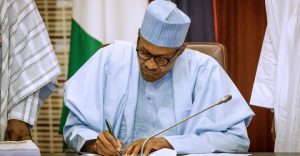 President Muhammadu Buhari has approved the appointment of Abatti Muhammad as the Acting Executive Secretary of the National Board for Technical Education (NBTE).

Naija News reports that this was made known in a statement on Wednesday by the NBTE Deputy Director, Public Relations, Jacob Abang.

Muhammad took over from Ekpenyong Ekpenyong, who retired from service on January 22 at the age of 60.

He was the Acting Executive Secretary since Masa’udu Kazaure bowed out three months ago, after serving as NBTE ES for 10 years.

Ekpenyong concluded the promotion exercise for senior staff currently awaiting approval by the board, as well as the commencement of the 2020/2021 accreditation exercise.

Muhammad, a First-Class graduate of Agricultural Engineering from the Ahmadu Bello University Zaria, was born on February 12, 1964, in Dawakin Kudu, Kano State.

He obtained a Master of Science degree in Soil and Water Engineering in 1991, and a Master of Arts degree in Development Studies from University of Leeds, UK, in 1999.

The new ES began his public service career as an Assistant Lecturer in the Department of Agricultural Engineering, Ahmadu Bello University, Zaria, in 1988.

He joined NBTE as a Senior Programmes Officer in 1992, and served as pioneer Secretary of the Journal of Agriculture Technology, Project Officer, UNESCO-Nigeria TVE Revitalization Project.

Muhammad was Rector of Kano State Polytechnic between 2004 and 2007. He returned to NBTE in 2007 as Deputy Director of Programmes (Engineering Technology Division).

He was the Director, Vocational, Technical and Skills Development Department until his elevation.