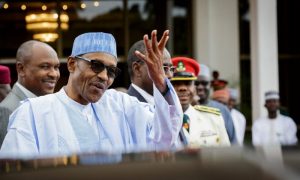 The presidency on Friday alleged that some people have perfected plans to launch smear campaigns against the person and administration of President Muhammadu Buhari.

The presidency in a statement signed by the president’s special adviser on media and publicity, Femi Adesina said some media outlets have been paid off to promote the smear campaign.

He added that the plan is to cause tension in Nigeria by portraying the president as someone who promotes ethnicity and nepotism.

He however argued that this is contrary to Buhari’s promise to belong to all Nigerians.

The statement, quoting security sources said: “Impeccable security findings indicate that those behind the plot have procured online blogs and newspapers, which are to launch coordinated publications, alleging subjugation and suppression of a particular religion and ethnic groups.

“A specific medium has so far contacted some opinion leaders, especially those very critical of President Buhari.

“Part of the planned publication is to make unwary readers believe that the President has continually used the powers of his office to shield and protect an ethnic group against crimes of murder, kidnappings, rape and banditry in the southern, middle belt and some northern states.

“The publication will also refer Nigerians to a 58-page document, which chronicles purported atrocities of the ethnic group in the South since 2017, all of which it claims the Presidency has turned blind eyes to.

“Again, the hatchet job will allege that the President has continued to place members of his ethnic nationality in sensitive positions, so as to confer undue advantage on them. This allegation is by no means supported with reasonable facts and figures.

“Just on Thursday, President Buhari, while meeting with the Nigerian Supreme Council for Islamic Affairs (NSCIA), led by Sultan of Sokoto, Alhaji Muhammad Sa’ad Abubakar, restated his even-handedness on the issues of ethnicity and religion. Said the President:

“’The Federal Government under my leadership does not, and will not, allow religious prejudice or partisanship to influence any of its decisions and policies. It is my solemn decision to be fair and just to all segments of society.’”

“Those who are bent on stoking ethnic and religious unrest in the country remain deaf to reason, and impervious to reality. They are hell-bent on distorting reality, and Nigerians are urged to be wary of them. It is all about quest for power, and filthy lucre.”

Naija News reports that the Peoples Gazette had accused the Buhari administration of pressuring network service providers to cut off connections to its site.

Reacting in a post on Twitter, Atiku Abubakar noted that the battle for the democracy that Nigeria enjoys today was fought and won with the Nigerian media.