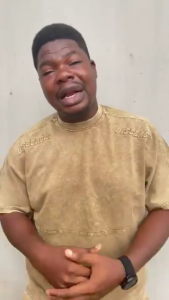 Debo Adebayo, popular Nigerian comedian better known as Mr Macaroni has accused the Nigeria Police in Lagos of threatening to kill him and other 39 protesters of the #OccupyLekkiTollGate.

Recall that the comedian and other youths were arrested yesterday while protesting against the move by the government to reopen Lekki Toll Gate where lots of lives were reportedly killed last year during the End SARS protest.

Narrating his awful experience a few moments after they were granted bail, Mr Macaroni said they were beaten to a pulp by the force men.

According to Macaroni in video clips shared on his verified Twitter handle on Sunday, February 14, the police told them that they were lucky it was not night, that they would have killed them all and nothing will happen.

Watch the videos in the thread below: