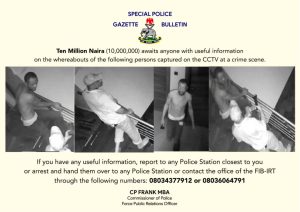 The Nigeria Police Force has announced mouthwatering reward to anyone that could help with useful information to the arrest of suspects whose faces appear in the photo above.

The police in a statement signed by its spokesman, Frank Mba, offered the sum of N10million to who ever could help with the arrest of the individuals.

Naija News understands that the suspects were captured on a CCTV at an undisclosed crime scene. Though the police did not reveal their crime, it, however, asked the general public to report to any nearest police station with helpful information and offered to appreciate the informant with the huge sum.

Ten Million Naira (#10,000.000.00) awaits anyone with useful information on the whereabouts of the persons in the photo below; pic.twitter.com/kdn11uYbqY