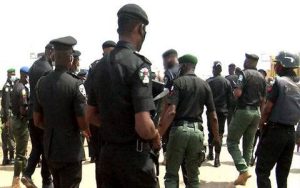 A mobile police officer in Imo State has reportedly killed himself a few moments after complaining of being ill.

Reports reaching Naija News alleged that the Inspector whose name is revealed as Umoh, shot himself dead on Wednesday, February 10 at the area command.

A source who confirmed the report to newsmen disclosed that the deceased was a visiting cop who was at the area command on special duty.

The source revealed that Umoh had earlier complained that he is sick shortly after returning from an assignment. He, however, reportedly went into one of the rooms at the police command where he shot himself dead.

“Mobile officers came back and one of them went to one of the rooms and locked it. The next minute, we heard a gunshot,”

“When we approached the quarters, it was discovered that the door was locked. It was forced opened and the mobile policeman was found dead in the pool of his blood. He shot himself on his stomach.” a source revealed.

On his part, when contacted about the incident, the spokesperson for the police command, Orlando Ikeokwu, said the state Commissioner of Police, Nasiru Muhammed, has ordered an investigation into the incident.

Meanwhile, the Ogun State Command of the Nigeria Police Force has debunked trending rumours that Nobel Laureate, Professor Wole Soyinka was recently attacked in his house by some Fulani herdsmen, Naija News reports.