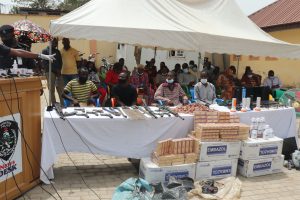 Operatives of the Nigeria Police Force attached to Operation Puff Adder II have arrested fifty (50) criminal suspects who are members of various notorious criminal gangs and networks across the country.

The arrests, which were carried out by operatives of the Intelligence Response Team and the Special Tactical Squad of the Force are based on successful follow-up on cases bordering on kidnapping, armed robbery, banditry, unlawful possession of firearms, amongst others.

According to a statement in Abuja on Tuesday by the Force Public Relations Officer, CP Frank Mba, a total of ten (10) sophisticated prohibited firearms, two thousand, four hundred and ninety-six (2,496) AK47 live ammunition, ten (10) live cartridges, Cartons of Tramadol Drugs worth over three (3) million naira, bags of weed suspected to be Indian hemp, two (2) laptop computers, eight (8) mobile phones, were recovered from the suspects in the operations.

Some of the notable cases and operations that led to the arrests and recoveries include the following;

CASE 1: INTERCEPTION AND ARREST OF FOUR (4) MEMBERS OF CRIMINAL SYNDICATE WHO ARE MAJOR AMMUNITION SUPPLIERS TO BANDITS IN KADUNA STATE 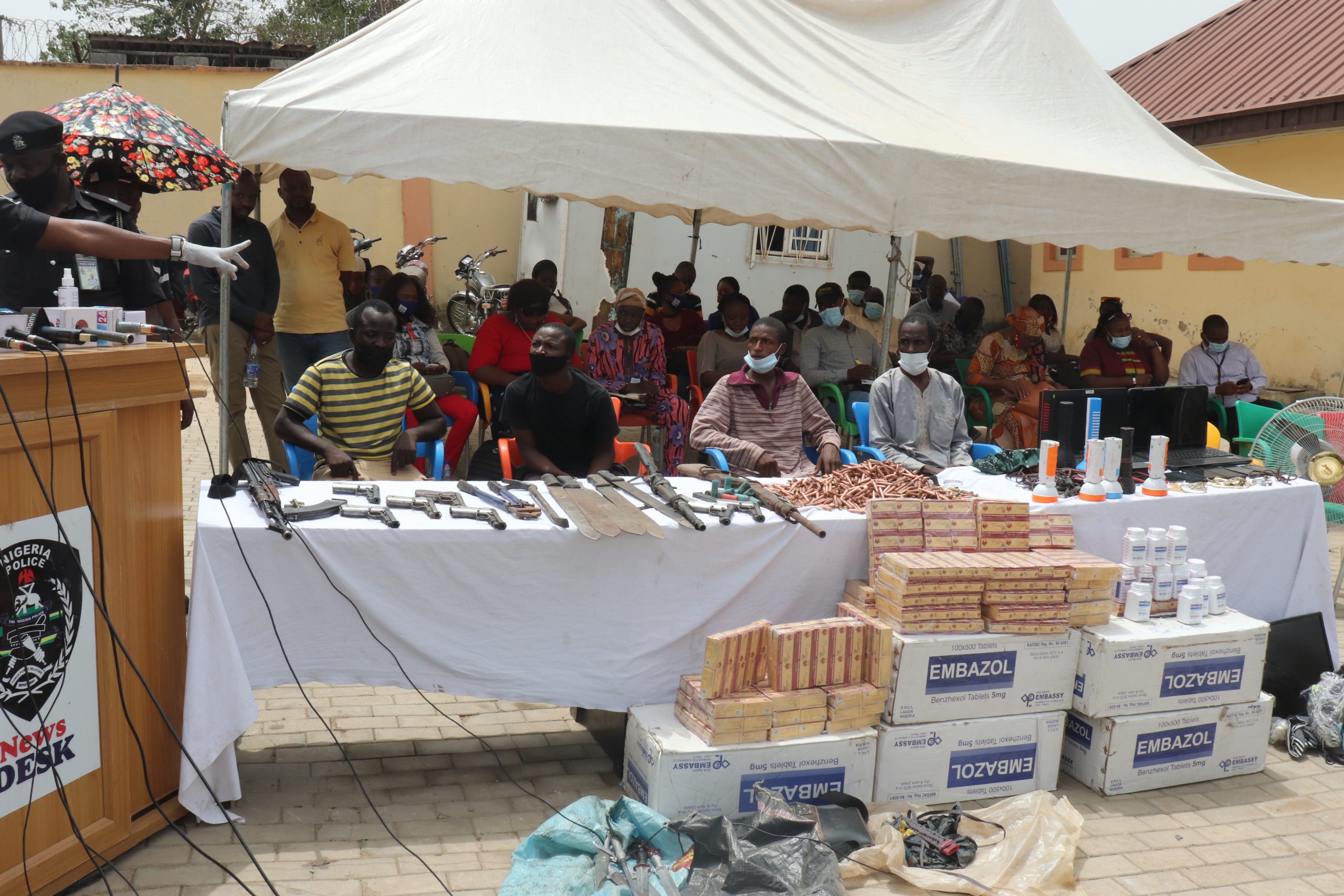 Operatives of the Special Tactical Squad attached to the Operation Puff Adder II while on confidence building patrol along Kachia – Kaduna Highway on 28th February, 2021, intercepted one Danjuma Dachung, a 30yrs native of Ryom, Plateau State and one other, Markus Danladi, in Kachia, Kaduna State conveying one thousand, five hundred and sixty-five (1,565) AK47 ammunition in a Volkswagen, Golf 3 Car. Investigations by the Police team revealed that the suspects are members of a major ammunition supply syndicate that supplies ammunition from Jos to bandits in their various camps/hideouts in forests in Kaduna State.

Further investigations led to the arrest of one Suleiman Tukur, 55yrs old and his son, Shuaibu Suleiman, 18yrs on 9th March, 2021 who are relatives of a notorious gang leader who was to receive the ammunition conveyed by Danjuma Dachung and Markus Danladi. Two Hundred and Thirty-One (231) AK47 live ammunition were recovered by the Police team at their residence in Karabi, Kaduna State.

CASE 2: ARREST OF TWO (2) SUSPECTS FOR ILLEGAL POSSESSION OF PROHIBITED FIREARMS, ARMED ROBBERY AND SALE OF FIREARMS TO NOTORIOUS CRIMINALS IN THE FCT AND ENVIRONS 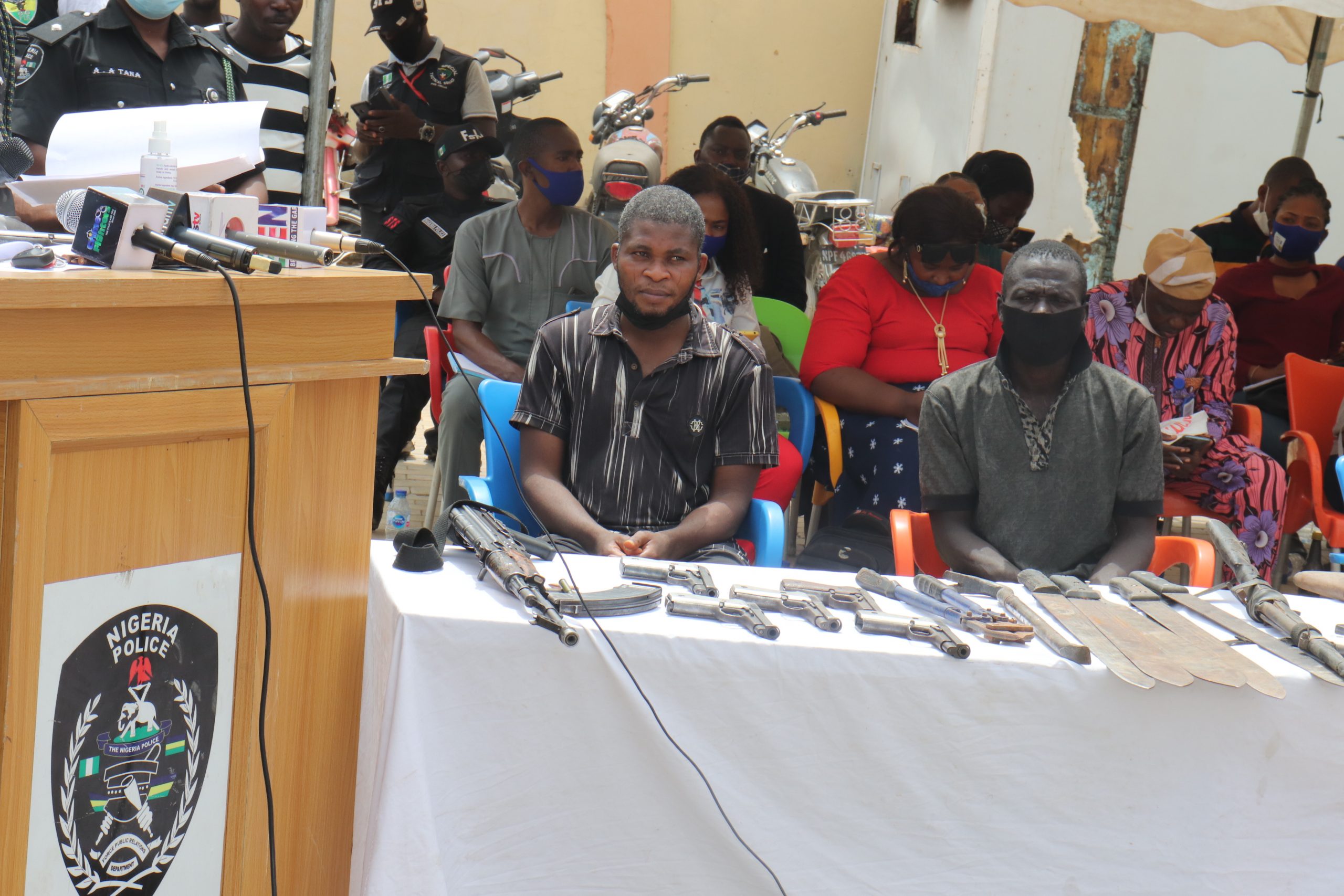 The Police team also arrested two suspects, Daniel Baba, 28yrs, and one Andrew Gbagi, 30yrs both from Kwali Area Council of the Federal Capital Territory. The suspects were arrested at the point of brokering a gun sales deal in the Kwali area of the FCT.

Investigations revealed that the suspects specialize in selling all calibre of firearms to armed robbers and kidnappers in the FCT and its environs. They also carry out armed robbery operations in Paiko, Dobbi, Kwali, Gwagwalada and Abaji communities in the FCT. Investigation is being intensified to locate their armoury, sponsors, and other members of the gang now at large.

CASE 3: ARREST OF NOTORIOUS KIDNAPPERS RESPONSIBLE FOR THE RECENT KIDNAPPING OF PHARM. ALHAJI IBRAHIMAA IN JOS AND SEVERAL OTHER ARMED ROBBERIES AND KIDNAPPINGS ACROSS PLATEAU, BAUCHI AND NASARAWA STATES

Sequel to the kidnapping of Alhaji Ibrahimaa, a Pharmacist residing in Barikin Ladi, Plateau State and his subsequent release after paying a ransom, operatives of the FIB-IRT succeeded in arresting four (4) suspects including the mastermind of the kidnap operation.

The suspects arrested are Abbas Adamu, 23yrs of Barikin Ladi, Plateau State, Ahmad Mohammed A.K.A Soja, 22yrs native of Magama Gumau, Ibrahim Jilde, 36yrs native of Toro LGA Bauchi and Saleh Idris, 20yrs, native of Magama Gumau in Bauchi. Investigations by the Police team revealed that the suspects were responsible for the kidnap of one DSS operative in Jos and a Professor in Mista Ali Village and several other armed robberies and kidnapping in Plateau, Bauchi and Nasarawa States.

The statement added that the Inspector-General of Police, Mohammed Adamu, also assured that the Police would continue to protect lawful members of the society by being relentless in taking the battle to the doorstep of criminal elements hell bent at threatening the internal security order of the country and bringing such suspects to justice.

Meanwhile, the picture of the late Nigerian Army top commander, Major U I Urang, killed by Boko Haram terrorists in Gudumbali area of Borno State has been obtained by newsmen.

Urang was said to have been killed last week when he and some soldiers ran into a Boko Haram ambush in Gudumbali area of Borno State.

The soldiers were travelling in a 10-vehicle convoy when they ran into the insurgents who unleashed heavy gun fire on them.

Urang until his death, was the Commanding Officer, 123 Special Forces Battalion of the Nigerian Army