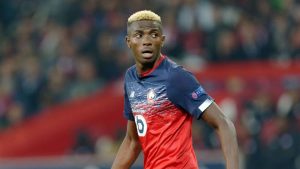 Super Eagles striker, Victor Osimhen has recovered from COVID-19, the development was announced by Napoli on Friday.

The Italian club in a statement released on Twitter noted that the striker tested positive after two swabs were taken, underwent another check and the test result returned negative.

Recall that Osimhen tested positive on January 1, after spending time in Nigeria, where he attended a birthday party and breached COVID-19 protocols.

However, after 21 days in isolation, Napoli announced that the former Lille striker has tested negative.

“@victorosimhen9 recovered from Covid-19,” Napoli wrote on their Twitter handle.

Osimhen was not available for his team in their 2-0 Super Coppa defeat to Juventus on Wednesday but will be hoping to play against Verona on Sunday.