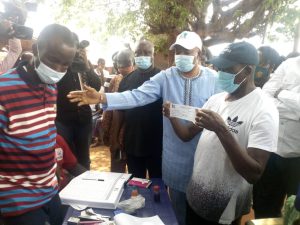 Former National Chairman of the All Progressive Congress (APC), Comrade Adams Oshiomhole, has said the revalidation exercise conducted by the party’s Interim Caretaker Committee is illegal.

He stated this while speaking to newsmen after revalidating his membership of the party at Unit 1, ward 10, Iyamho, Etsako West Local Government Area of Edo State.

The former Edo Sate Governor said it would be meaningful for those who decamped to APC to register while those who have left should be deleted.

Oshiomhole said: “APC is governed by the constitution, not by man. The constitution only provides for registration and I registered as a member of the APC in 2014 under the Interim national chairman Chief Bisi Akande.

“There is nothing in the APC constitution that says a member shall revalidate or renew his membership. Once you register when you joined the party and you have not decamped, you are a member. So revalidation is strange to our constitution.

“I have only done this because I want peace to reign but in doing this, we have to be careful not to create constitutional breach. So, when people talk about revalidation, we must begin to ask questions because people talk as if the party has no history.

“If you ask me as a foundation member who have never decamped to revalidate his membership, it is double registration because there is nothing like revalidation in our constitution.

“By asking me to revalidate my membership means I was not a member when I have never leave the party, so I think the correct language should be either reviewing or updating because it make sense to review voters register due to the new members that have joined or those that have exited.”

Naija News reports that the National Caretaker and Extraordinary Convention Planning Committee under the leadership of Governor Mai Mala Buni of Yobe State has begun the nationwide exercise to update the registers.

But Bola Tinubu alongside his friend Akande had faulted the registration exercise, describing it as an aberration.

Akande had last week questioned the decision of the party leadership to call for a re-validation of the party’s membership register less than ten years after the party was initially formed in 2014.

He noted that if not properly managed, handpicking the leadership of any political party might spell danger for such a party.

The APC chieftain added that calling for an update of the membership register less than ten years after the formation of the party is an aberration that should not be taken lightly by the leaders.

Also speaking on Saturday, Tinubu said he would endorse Akande’s position on the ongoing membership registration and revalidation exercise.

The APC national leader also described the exercise as a waste, urging the party leadership to embark on true reconcillaition.