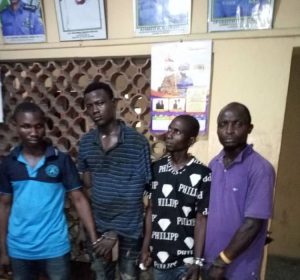 A 35-year-old man identified as Tochukwu Chidi has been reportedly murdered during a heated argument in the Bariga area of Lagos.

Naija News understands four members of the Oodua People’s Congress have been arrested by the police for allegedly responsible for Chidi’s death.

It was reported that the deceased was beaten to death by the Yoruba nationalist organization. Reports reaching Naija News revealed that Chidi died as a result of many injuries by stabs. Confirming the incident, spokesperson of the state police command, Muyiwa Adejobi revealed that the incident happened on Saturday, February 13 at No 76 Arobadede Street in Bariga.

The police PRO disclosed that the victim was immediately rushed to the General Hospital, Bariga for treatment but was confirmed dead moments later.

On his part, while reacting to the development, Lagos State Commissioner of Police, CP Hakeem Odumosu, lamented and ordered that the matter be transferred to the State Criminal Investigation Department, Panti, Yaba for proper investigation and prosecution.

Meanwhile, no fewer than four persons have been reported dead in a road crash on Ijebu Ode -Benin expressway.

Naija News reports that the horrible incident which happened in Atoyo, inbound Ogbere involves a 14-passenger commercial bus and a fuel tanker.