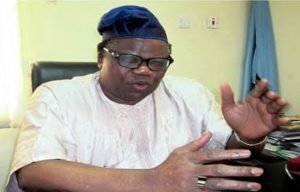 The Edo State Governor, Godwin Obaseki has described the late Tony Momoh as a great son of Edo who was totally Nigerian.

Obaseki said this in a statement on Monday evening in which he reacted to the death of Momoh, a former Minister of Information and Culture in Nigeria.

As previously reported by Naija News, Prince Momoh died peacefully in his home in Abuja without any form of illness.

He was the Yerima of Auchi Sacred Kingdom. He was 81 years old.

Reacting to the death of the elder statesman, Obaseki wrote on Twitter: “I mourn the death of veteran journalist and former Minister of Information and Culture, Prince Tony Momoh.”

“Prince Momoh, though a great son of Edo, was a total Nigerian. He was forthright, driven and spoke with candor. He will be greatly missed.”

He noted further in a statement made available to our newsroom by his media aide, Crusoe Osagie that “It is with a heavy heart that I received the news of the death of veteran journalist and former Minister of Information and Culture, Prince Tony Momoh.

“Prince Momoh, though a great son of Edo State, was a total Nigerian. He was forthright, driven and spoke with candor. As a nationalist, he was unapologetic about the Nigerian project. His lasting legacy remains the enthronement of democratic values in Nigeria.

“A progressive and committed Nigerian, Prince Momoh’s wise counsel would be greatly missed especially as we navigate our current challenges as a nation.

“On behalf of the government and people of Edo State, I commiserate with his family, friends and associates and wish that God grants them the fortitude to bear this irreparable loss.”

Meanwhile, Governor Rotimi Akeredolu of Ondo State has asked only those ready to contribute financially to the All Progressives Congress (APC) to join the party.

He stated this while speaking during a stakeholders’ meeting ahead of the party’s membership registration and revalidation exercise scheduled to commence on Tuesday across the 3009 polling units of the state.

Speaking when receiving members of the committee from the National Secretariat which was led by Murphy Lawal, Akeredolu said no one should be persuaded to join the ruling APC.

He stressed that with members’ financial involvement, smooth running of the party will be hitch-free.