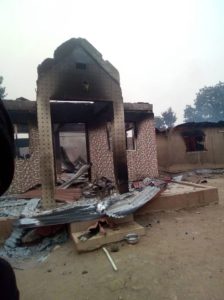 The Coalition of Northern Groups (CNG) has condemned the attack on herders’ communities in Igangan in the Ibarapa North Local Government Area of Oyo State on Friday.

Naija News reports that an activist, Sunday Adeyemo, popularly known as Sunday Igboho, stormed the Fulani settlement to eject the herders and the Seriki Fulani, Salihu Abdukadir from the town.

It was gathered that a Fulani woman was shot dead while properties worth millions of naira were destroyed during the attack.

But In an interview with The Nation on Saturday, CNG spokesman, Abdul-Azeez Suleiman, said the attack was part of a grand design to destabilize Nigeria and in particular bring the North to its knees.

Suleiman noted that the group attacked the attack from Ondo state following Akeridolu’s directive but was surprised about the attack in Oyo state.

The CNG spokesman, however, warned the instigators of the attacks to desist from such action so that it will not generate into an ethnic crisis.

He said though, the Coalition was still meeting over the development, it was already considering a number of options, starting with recalling all Northern communities in the south back home safely, before considering the next move.

He said: “We are meeting over the development and shall come up with a definite position. We are considering a number of options.

“We expected the attack from Ondo following Akeridolu’s directive. But now it’s coming from Oyo.

“As a first step, we are considering recalling all Northern Communities in the south back home safely before considering the next move. We however warn the instigators of this violence to note that the North certainly knows how to repay coin for coin.

“We certainly don’t consider it an isolated incident but linked to a grand design to destabilize Nigeria and in particular bring the North to its knees by targeting a major component of its population, the Fulani and their livestock assets.

“It is no longer in doubt that for too long, enemies of the North both foreign and local have worked strenuously to ensure that the region remains backward, divided, weak, confused and bewildered by myriads of challenges and problems.

“Today everyone can see a clear pattern drawn from the strategies employed to achieve these results; namely the diminishing of the Northern viability and in particular, bringing the Hausa/Fulani population down by direct annihilation or political and economic incapacitation.”