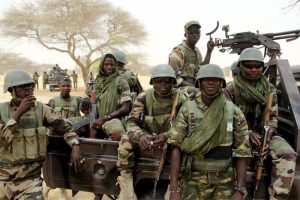 Troops of the Nigerian Military have killed some top Boko Haram commanders in a fresh onslaught against the terrorists.

Naija News understands the operation that led to the killing of the Boko Haram commanders was carried out by the Nigerian Military in collaboration with the Multi-National Joint Task Force (MNJTF).

The coordinated operation carried out on Friday, 29th January resulted in the killing of Ali Bor and Maleum Modu, two top commanders of the Boko Haram sect.

“Alai Bor, a leader of Boko Haram in Buwari village in Bama, was killed while attempting to cross Gwoza-Pulka highway with six others in his entourage.

“The other commander, Maleum Modu and three Boko Haram fighters were also gunned down by the Nigerian troops”, a military intelligence source told PRNigeria on Saturday.

Other Boko Haram fighters were also killed or wounded in the operation while items such as motorcycles, weapons, and others were recovered by the troops.

Meanwhile, the immediate past Chief of Army Staff, COAS, Lt-Gen. Tukur Buratai has assured Nigerians that insurgency will soon be a thing of the past in the country.

Buratai stated this while addressing the audience during the Pulling Out Parade held in his honour at the Mogadishu Cantonment in Abuja on Friday, January 29, Naija News understands.

Appreciating Governor Babagana Zulum of Borno State for the support he gave him while battling Boko Haram terrorists in the state, Buratai urged the new COAS to maintain the momentum and the pressure to rid these last vestiges of the terrorists in the north-east.

He said: “Let me thank my governor, Professor Babagana Umara Zulum. He has been supportive to me and of course, the Nigerian Army, especially in the fight against insurgency,” Buratai said.

“He came with a unique leadership and I assure you, collectively, the Nigerian Army and the Borno State Government will end this insurgency within the shortest possible time.

“I want to urge the COAS to maintain the momentum and the pressure to rid these last vestiges of the terrorists in the north-east.”