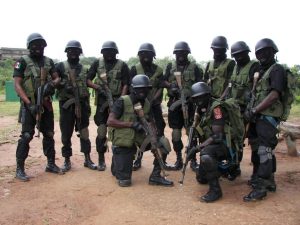 Troops of the Nigerian Army 402 special forces brigade have eliminated several Boko Haram terrorists during a clash in Borno State.

The troops, deployed under Operation Takaibango, a subsidiary of Operation Lafiya Dole in the North East also captured arms and ammunition from the terrorists according to a statement on Friday by Brigadier General Benard Onyeuko, Acting Director Defence Media Operations.

The operation took place on 20th January 2021, the statement noted.

“Troops of Operation TURA TAKAIBANGO a subsidiary Operation of Operation LAFIYA DOLE in the North East continue to obliterate elements of Boko Haram/Islamic State’s West Africa Province criminals with uncommon ferocity as they overrun *Abbagajiri and Dusula* towns in Damboa.”

“The troops of 402 Special Forces Task Force Brigade led by the Commander engaged them with superior fire power resulting in high casualty on the terrorists. In the aftermath of the decisive encounter, 5 Boko Haram Terrorists were neutralized while few others are believed to have escaped with gunshot wounds.”

“Equipment captured from the criminals include; one Pulemyot Kalashnikova Tankovyy(PKT) Gun, 3 AK 47 Rifles, 4 extra AK 47 Rifle magazines and a Vulcanizing Machine. Other items captured and destroyed includes food stuffs, some Improvised Explosive Device (IED) making materials including the criminals’ hideouts and clothings among others.”

“The renewed onslaught against the remnants of Boko Haram/Islamic State’s West Africa Province criminals by the dogged troops of Operation TURA TAKAIBANGO is indicative of the end of all criminal elements within the North East.

“The troops of Operation TURA TAKAIBANGO are highly commended for their dedication and determination in flushing out remnants of the terrorists from their hideouts. They are also encouraged not to relent but build on the successes recorded.”

“The entire populace of the North East region are hereby assured of the Nigerian Army’s renewed vigour and determination to crush the remnants of Boko Haram/Islamic State’s West Africa Province criminals from their enclaves in this zone,” Onyeuko stated.

Meanwhile, members of the dreaded Boko Haram terrorists group are regrouping in Nasarawa State which has recently seen a surge in security challenges.

Naija News reports that this was made known by Governor Abdullahi Sule on Friday in Abuja.

He disclosed this while speaking to State House correspondents after meeting with President Muhammadu Buhari.

Governor Sule recalled that Boko Haram terrorists had been dislodged from their camp in Toto before regrouping at the Nasarawa/Benue border from where they are now launching attacks on residents.

According to the governor, some of the Boko Haram elements active in Nasarawa State belong to the Darussalam group that had been dislodged from Niger State.