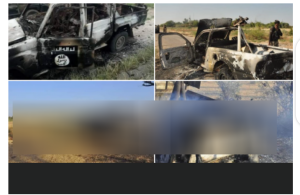 The Nigerian Air Force on Monday shared pictures of its attack against Boko Haram terrorists in Borno State.

NAF captioned the pictures on Twitter, “Photos: Battle of Marte: See the damage inflicted on terrorists at the outskirts of Marte in Borno State as @NigAirForce helicopter gunships, dispatched by the Air Task Force (ATF)of Operation LAFIYA DOLE, destroyed about a dozen terrorists’ gun trucks & other vehicles.”

(1/2) See the damage inflicted on terrorists at the outskirts of Marte in Borno State as @NigAirForce helicopter gunships, dispatched by the Air Task Force (ATF)of Operation LAFIYA DOLE, destroyed about a dozen terrorists’ gun trucks & other vehicles pic.twitter.com/5oWGjfi2Mz

According to SaharaReporters, which used advanced technology discovered that the pictures in the post are old pictures from different attacks on the terrorists.

According to Google reverse image search, the images were taken in 2018 during an operation in Damasak, Borno State.

“Accordingly, a Nigerian Air Force Intelligence Surveillance and Reconnaissance platform was dispatched to search for and locate the convoy of vehicles.”

“The ISR aircraft spotted vehicles at a location 24 km SW of Gudumbali heading in a northwards direction. Consequently, a helicopter gunship was scrambled to attack the convoy.”

“The helicopter arrived at the location and was vectored to the position of the vehicles, which, at the time, were about midway between Nigerian Army locations at Metele and Arege.”

“Following communications with ground troops, the BHT vehicles were positively identified, isolated and attacked by the helicopter gunship in successive strikes,” NAF Director of Public Relations and Information, Air Commodore Ibikunle Daramola, had said in a statement attached to the picture on September 16, 2018.”

The news platform also revealed that the second, third and fourth pictures were not taken in Marte as posted by the Nigerian Air Force.

A senior military officer who spoke to SaharaReporters noted that the pictures were not from the attack on the terrorists at Marte.

He said, “I have seen all the pictures as well. Though we dislodged the group in Marte and killed many of them, it’s shameful that the Air Force could make such a silly mistake. None of the pictures posted was taken in Marte, some are from Gujba in faraway Yobe State. This is so shameful.”