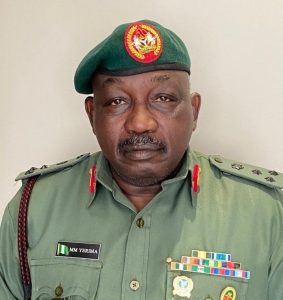 This follows the handover ceremony, which held on Wednesday at the army headquarters in Abuja, the nation’s capital city.

As earlier reported by Naija News, Yerima was appointed on Tuesday to take over from Sagir Musa as the army spokesperson.

Speaking at the handover ceremony, Yerima noted that he is passionate about relating with members of the public and journalists on issues of the army so together, progress can be made.

He emphasized the need to always make the correct information available to members of the public and promised to operate an open-door policy with newsmen and the public in general.

The new spokesperson promised to be friendly and welcome to constructive criticism that will help in the discharge of his duties and help the army record greater success.

He highlighted trust, mutual understanding, and respect as three cardinal points that will define his relationship with the media.

“The COAS, who was once in this position, is ever so determined to sustain the enduring relationship with the media through trust, respect, and mutual understanding,” he said.

“On my own part, as the spokesman of the Nigerian army, I assure you that my doors will be open at all times in order to respond to your inquiries.

“The better part of my career in the military has been devoted to this very important relationship with the media, and I have always cherished the idea of working with you to give our people the right information about the military and its operations.

“As you all know, nothing boosts the morale of our fighting troops more than the solidarity of all Nigerians, especially media reports that ginger their zeal and fighting spirit and sacrifice to the nation.

“So, I urge you to be very mindful of that and to always remember that their victory is the victory of all Nigerians. We shall be open to constructive engagements and criticism that will support the military operations against the enemies of the country.

“We did it together in my previous assignments, but more nostalgic was my warm and cordial relationship with you during my time as the director of defence information at the defence headquarters. I still recall how helpful and friendly you were with me during those times, and I have also not forgotten a few lessons I learned in the course of that relationship.”

It was gathered that the terrorists had attempted to attack the military base through an ambush attack but met superior tactics and firepower which resulted in the killing of several of them and the destruction of their gun trucks.

Naija News understands not fewer than 19 terrorists were killed during the fierce gun battle with the soldiers while gun trucks and other items belonging to the insurgents were also destroyed.

Details of the encounter made available in a statement by PR Nigeria who quoted a source has it that the terrorists stormed Rann around 6pm on eight gun trucks and several motorbikes, and attempted to attack the troops of 3 Brigade at their military base.

After what appeared like an ambush attack from the Boko Haram fighters on the military base, the troops reportedly staged a tactical withdrawal from their base, only to launch a massive aerial and ground counter-attack against the terrorists, who fled.