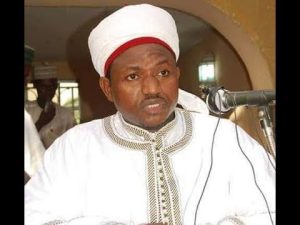 Sheikh Abduljabbar Nasiru Kabara who saw his religious activities banned by the Kano State Government for allegedly inciting a breach of peace in the state has filed a case of infringement of fundamental rights against the government at the Federal High Court in the state.

The Federal High Court has fixed February 18, 2021, for hearing in the case of infringement of fundamental rights.

The head of lawyers representing the Muslim scholar, Barrister Rabiu Abdullahi, disclosed this on Wednesday while speakimg with newsmen.

Abdullahi while speaking on the development said the fundamental rights to religion, expression, association, movement, and ownership of the immovable property had all been infringed by the actions taken by the state government.

He explained that the residence of the embattled scholar was taken over by security men who barred everyone from accessing the house.

He further explained that the legal team filed a motion before Justice Allagoa, the presiding judge of the Federal High Court in Kano on February 5, 2021, seeking enforcement of his rights.

He said, “We analysed all the issues and saw that an action of enforcement of fundamental human rights of Sheikh Abduljabbar Nasiru Kabara will be filed before the Federal High Court.”

“That action was filed on February 5, 2021, seeking the following orders; an order of the court allowing the applicant, Sheikh Abduljabbar Nasiru Kabara, to exercise his right of personal liberty, right of fair hearing, freedom of movement, right of freedom of thought conscience and religion, right to peaceful assembly and association, right to freedom of expression and right to freedom from discrimination as enshrined in the Constitution of the Federal Republic of Nigeria.”

“The second order we sort is that the declaration of the court that the Right to Life and right to acquire and own immovable property anywhere in Nigeria as enshrined in the constitution of the Federal Republic of Nigeria are likely to be infringed by the respondent against the applicant in the manner complained of in the affidavit in support of the application.”

“Thirdly, we sort the declaration of the court that any act of intimidation, harassment to arrest and detain the applicant, Abduljabbar Nasiru Kabara is in breach of his constitutional rights provisions and such arrest and detention is unlawful.”

The defendants to be notified to appear in the case before the courts are the Kano State government, the Attorney General of the state, the Nigeria Police, DSS, and the Nigeria Security and Civil Defence Corps.

“These are the orders that we prayed from the court and the matter was fixed to today for the hearing of our demands.”

“The matter was adjourned to February 18, for the hearing of the application and the respondent will be served to appear before the court” he stated.

Recall that the Kano-based Islamic cleric, Sheikh Abduljabbar Nasiru Kabara, has accused Governor Abdullahi Ganduje of banning him from preaching because he worked against him during 2019 general

The election, which was keenly contested, led to runoff before Ganduje, who ran under the platform of the All Progressives Congress (APC), defeated Abba Kabir Yusuf, his Peoples Democratic Party (PDP) rival.