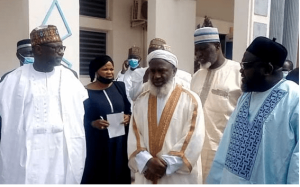 Speaking to reporters after meeting with Governor Sani Bello of Niger State on Friday in Minna, Gumi advised the federal government to extend amnesty to bandits as it was done to Niger Delta militants.

The cleric asked the government to arrest and prosecute any bandit who goes ahead with criminal activities after amnesty has been granted.

“The outcome of the meeting was very positive because you have a warring faction saying that they have complaints and grievances which are very simple. There is hope that we can resolve this,” Gumi said.

“I appeal to the government and recommend that government should do to them exactly what they did to the Niger Delta militants and give them a blanket amnesty. Then if anybody will continue we will deal with him.”

Gumi said he has presented the report of his findings to the Governor after meeting the bandits in the forest.

The cleric expressed optimism that the kidnapped persons would soon regain their freedom, adding that he had a fruitful meeting with the bandits.

It will be recalled that some students and staff of Government Science College, Kagara were kidnapped by armed bandits on Wednesday who stormed the school premises around 2 am.

Apart from the staff and students kidnapped, a student was also killed by the bandits during the attack.