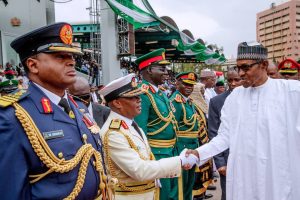 The removal of former service chiefs on Tuesday by President Muhammadu Buhari saw numerous military personnel rejoice over the decision.

Naija News had earlier reported that President Muhammadu Buhari has appointed new service chiefs for the nation after he sacked the previous ones.

Recall that the former service chiefs were appointed in July 2015, barely two months after assuming office.

Military personnel in a video were seen dancing, while they fire shots in celebration of the removal of the former security heads.

There was similar jubilation at a Naval facility.