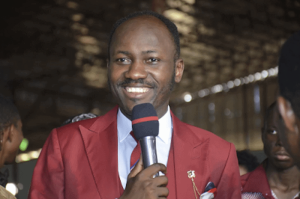 The woman Apostle Johnson Suleman is accused of sleeping with Pastor Faith Edeko, who heads the Abuja branch of Omega Fire Ministries in Utako has debunked the allegations of alleged infidelity.

The cleric also debunked the alleged threat to life and obstruction of access to children, levelled against Apostle Suleman, by her ex-husband, Pastor Mike Davids.

Pastor Faith during an interview with Vanguard Monday, described the allegation levelled against the cleric as cheap blackmail to tarnish the image of the Apostle Suleman.

She further stated that she had never slept with anyone nor would she ever try such act.

Pastor Faith further stated that accusing her of sleeping with the General Overseer, a man who adopted and trained her since her own father passed away is like saying she is sleeping with her own biological father.

She said the only truth her former husband said in the video was that he married her a virgin. She wondered how she started sleeping with Apostle Suleman who she sees as her biological father, adding that if she did not do that when she was still a virgin and under his roof, how could she do it when she got married?

She said her husband has always told her that she was not up to his standard. She accused her husband of trying severally to elope with other women abroad but to no avail.

The cleric added that her ex-husband sent his people to hers, collected the dowry he paid on her and officially dissolved the marriage.

She said her ex-husband had been planning to dissolve the marriage for a long time when he refused till date to send a copy of their marriage certificate to the Local Government for documentation.

She said he had collected both the original and photocopies of their marriage certificates on the guise of applying for a visa abroad only to come and tell her that he lost them.

Pastor Faith said her marriage crashing does not have anything to do with Apostle Suleman.

“I grew up in papa’s(Apostle Suleman’s) house. He trained me, he brought me up. My mum knows him. My family and everybody knows him. My father died when I was young and he adopted me as his own daughter. So, if you married me a virgin and I remained with him a virgin after 20 years plus, I don’t get it.”

“I have never had anything to do with Papa, not for one day. Which Papa!? Papa that if you send a message and end it in any way not proper, he will call you and ask you what is the meaning of the last part.”

“Mike did not introduce me to Apostle Johnson Suleman, I introduced Mike to him as the man that wants to marry me. And the question Papa asked me was, ‘is this the man?’ and I said yes. So, I don’t know what Mike is talking about because I married him a virgin, just like he confirmed in his video. That is the only truth he said in all his videos.

“When Mike met me, I was working in NTA and I later left the job. And Mike would always tell me that I’m not up to his standard. Mike has always wanted to elope with some women abroad. But I covered him because he is my husband. Go to Kano church and they will tell you that there is nothing that Mike is not guilty of, but I will come out and tell them that my husband did not do that. I have recordings.”

“But what I don’t understand is what brought Apostle Suleman into this issue. Why drag an innocent man into this issue? You walked out of the marriage, you said I am not up to your standards, you want to go and make money abroad. You left me in Kano and my family put my pieces together. It was people like Apostle Tenebe and Apostle Sam Okpe who begged Mike to go back. Tenebe begged Mike to go back but he refused that he wants to move on, that this is not the level of success he prayed for himself.”

“Our marriage crashing has nothing to do with Papa. She said, contrary to claims, that Pastor Davids did not resign but was driven out of the ministry because of his ring doings. That was what led me to go begging. It took me close to a year to get access to papa. It was when I heard that Apostle Sam Okpe was close to papa that I went to him to help me beg papa. And he did it. He took me by the hand to papa and begged him. The next week, he took Mike to papa and begged him and Papa said he had forgiven him and we all moved on fine. Only for him to wake up one day and said he was leaving the marriage. No day passes that I don’t beg him, kneeling down as if he is a God and he would tell me that ‘i will leave you, you should be proud that I married you.”

“When he was leaving, I begged him to let the children stay with me.

“I don’t know where Mike stays but I heard that he is in Abuja. Mike said that I have a church in Utako. He knows the place. He said he is looking for me and the place to look is online? Did you forget the roads to my village and family?

“Does Apostle Johnson Suleman know when you sent your people to collect back your bride price? Bride price he collected around June or July? Was Apostle Suleman in the picture when he collected the bride price? They went to my uncle’s house and he told them it’s not done that way but they said noo, he wants to move on. So, are we still married?”

“Let me shock you. He never submitted a copy of our wedding certificates to the Local Government for documentation.” She said pastor Davids collected both the photocopy and the original marriage certificates from her on the guise that he was applying for a visa to go abroad only to come back and tell her he lost them both. She said he even made efforts to retrieve the only copy with the church but was denied.”

On whether her marriage with pastor Davids was still functional, pastor Faith said her union with pastor Mike Davids had been dissolved and that there were witnesses from both families.

“They brought their elders and witnesses, my elders were there and my mum was there and the marriage was dissolved,” she declared with a note of finality.