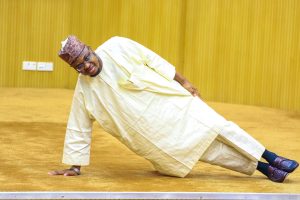 Many questions have been asked in recent time as to how Dr Isa Aliyu Pantami emerged as Nigeria’s Minister of Communications and Digital Economy despite his Pro-Al-Qaeda views.

In respond to the many questions asked by concerned citizens, the Nigeria senate is quoted to have said that Pantami got appointed without objection as security agencies could not draw attention to his past extremist views in support of terror groups.

Sources according to a report monitored by Naija News on TheCable, revealed that the senate acted only based on information made available to it by the security agencies including the Department of State Services (DSS), the National Intelligence Agency (NIA) and the police.

Though Pantami had described as false some of the allegations, what started as an unverified report about being on the United States watchlist over alleged ties with terror groups, however, snowballed into heightened calls for the minister’s removal from office.

This was after the President Muhammadu Buhari is minister admitted to expressing support for extremist anti-western ideologies in the past.

However, the claims that security agencies  failed to carefully examine the minister could not independently verify yet at the moment.

Naija News understands that Pantami had in videos from the 2000s expressed while he was against the ideologies of Boko Haram but supports what Al-Qaeda and the Taliban stand for.

“This jihad is an obligation for every single believer, especially in Nigeria. Oh God, give victory to the Taliban and Al-Qaeda,” the Nigeria minister was quoted as saying in one of his teachings years ago.

Although he has recanted the views after claiming that he has “changed several positions taken in the past based on new evidence and maturity”, a question continues to pop up: How did he get past scrutiny by the senate and security agencies?

A source from the National assembly has told reporters that in confirming ministerial nominees as it is the case with other nominees of the president, the senate sends the forwarded names to security agencies to act on.

On receiving the names, the agencies mostly the police, the DSS and the NIA will then invite the nominees for questioning while carrying out a background check on them. Afterwards, the agencies communicate their findings to both the executive and the national assembly.

However, in the case of the Islamic scholar turned communication minister, legislative sources including a member of the senate leadership said there was no “adverse” report indicting Pantami when he was screened as a ministerial nominee.

“After they appear before the agency, there will be a report (sent) to the relevant committee of the senate as to their security screening. So, the senate will only rely on the report of the screening,” one of the sources reportedly told TheCable.

“None of them (the ministerial nominees) had any adverse security report that could be the basis for the senate not to screen them.”

No response however was received from Peter Afunanya, DSS spokesman, and Frank Mba, police spokesman, when contacted on the trending matter, TheCable said.