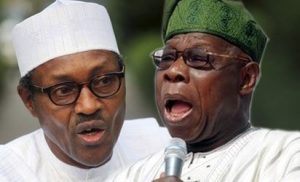 In his article published on Thursday, titled ‘The priest and the president’, Adesina claimed Obasanjo had called Pam an idiot in 2004 when the former president visited Plateau to mediate in the religious crisis rocking the state.

The crisis had claimed several lives and led to the destruction of properties, while a state of emergency was declared in the north-central state.

According to Adesina, security agencies had asked Pam, who was appointed executive secretary of Nigerian Christian Pilgrims Commission (NCPC) by President Muhammadu Buhari in 2020, to apologize to Obasanjo after the encounter.

He wrote: “Let’s go back in time to May 2004, when the lands of Yelwa-Shendam, in Plateau State, had turned crimson. Primitive fury and hatred were unleashed, leading to internecine bloodbath. Hundreds and hundreds of people were killed along religious lines.

“While the place was turned into killing fields, the then President Olusegun MATTHEW Obasanjo (emphasis on that middle name) visited, and met with the different stakeholders.

“During the dialogue session, the then Chairman of Christian Association of Nigeria (CAN) in Plateau State asked a question the President found offensive. And the Owu man, a retired Army General, flew off the handle. He let out this fusillade:

“What role have you played to bring about peace as CAN Chairman in Plateau State? CAN, my foot! What kind of CAN Chairman are you? Did your own Christianity teach you about revenge? You are an idiot. A total idiot. And I have no apologies for that.

“Pin-drop silence. Strange things do happen in Nigeria. But it had never been seen like that. For a father of the country to publicly excoriate a religious leader? For a Matthew to call a preacher an idiot, “a total idiot?” It was sacrilege walking on two legs.

“And again, for a President, who laid claim to being a born again Christian, to denigrate the association of his own faith?

“CAN, my foot!” It was the height of it. Of course, Obasanjo was President! Big shot. But many things were wrong with his conduct and the cavalier treatment he gave to a priest, a man of God.The Holy Bible makes certain things clear about our spiritual leaders.”

“A tale of the priest and two Presidents. Publicly flagellated by one, a Matthew, and now, honored by the other, a Muhammadu. What Rev Pam didn’t get from a Christian, he got from a Fulani man from Daura, a Muslim. Is there any lesson we can learn from this? Think about it,” he said.

“A couple of weeks back, precisely on January 14, 2021, Rev Pam was at the Presidential Villa in Abuja, leading an NCPC team on a courtesy visit to the President. An idiot, “a total idiot” was at the seat of power, being treated with the dignity he deserved, by a man of a different faith. Holy Moses!

“I tell you, this Rev Pam, from Gyel, Jos South Local Government Area of Plateau State is a reconciliator, a peace advocate, and that is why God has lifted him up today. And not through a Matthew, but a Muhammadu, one against whom all lies under the sun have been told: he’s a religious bigot. A herdsman. A nepotist. Jihadist. Everything. May God forgive those who condemn the person they don’t know, and have refused to know.”