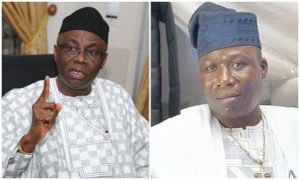 The General Overseer of the Citadel Global Community Church, Lagos, Pastor Tunde Bakare, on Tuesday, disclosed the discussion he had with Yoruba activist Sunday Adeyemo popularly known as Sunday Igboho amid the Herdsmen crisis affecting Ibarapa area of Oyo State.

Bakare stayed this during an Instagram Live Chat with popular journalist, Dele Momodu.

Recall that Igboho issued a seven-day quit notice to criminal herdsmen in the community.

Bakare said, “Immediately, Sunday Igboho gave that ultimatum, I knew there was trouble if nothing was done immediately. And he carried out what he said he would carry out.”

“What did I do? As an individual, I found a way of reaching out to him (Igboho). I have never met him before, never spoken to him before but I reached out to him and after a while, he called me and I said, I appeal to you by the mercies of God, two wrongs cannot make a right, you have proved your point, let us find alternative solution so that there would be no bloodbath.”

“He promised to come and see me in Lagos and I had made preparations for him to come but unfortunately, his father took ill and he had to take him to the hospital.”

“I followed also to ensure I prayed for the father. I told him, I am not saying you are right or you are wrong, that is not the issue but please, if you carry out this threat, it would lead to something bigger than you and you do not want to go down in history as someone who had good intention of defending the rights of his people but ended up bringing them a bloodbath.”

“He thanked me and then he said he would find time to come to Lagos.”

The cleric added that if care is not taken, there could be 10,000 Sunday Igbohos in the country.

He called on the security agencies to bring all perpetrators of killing, kidnapping and rape cases in Ibarapaland to book.

He added, “Let us not throw legal semantics with this issue. When people are being slaughtered and being killed and this man is reeling out the names of those who are killed and nobody has disproved that they were truly killed, whoever killed those people if they are not brought to book, then, you cannot be asking a man who is saying I want justice to say he is wrong.”

“Where were the police and security agencies when those people were being killed? If their killers were not brought to book, we could have more than 10,000 Sunday Igbohos in one day if care is not taken.”