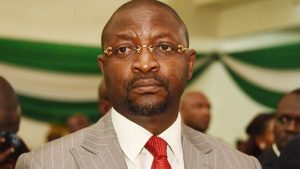 The Minister of Youth and Sports Development, Sunday Dare, says the Godfatherism in politics in its entirety is not bad as being perceived.

He made this known during the official unveiling of the Lead Generation Initiative (LGI) in Abuja on Thursday.

Speaking further, the minister said anybody referred to as a godfather must have “paid their dues” and have some level of influence.

He said: ‘In the context of our own politics, a godfather is someone who sits there, takes all the decisions, decides who gets what, whether it is resources or positions.

“But beyond that we also have godfathers for our children. I think it is important, and I am being careful in responding to this, even though we call it godfathers in our climes, I can tell you that in other political crimes they go by other names.

“The concept of godfatherism simply means that there are some individuals or influential people who have the levers of control when it comes to political decisions.

Meanwhile, Governor Nyesom Wike of Rivers State has revealed why he donated N500 million to the Sokoto state government.

Naija News had reported that the Sokoto central market was on Tuesday morning gutted by fire. It was gathered that the fire which started around 7 am was caused by a generating set.

The fire destroyed many shops and goods worth millions of naira.

In a statement issued on Wednesday, the Media Aide to Governor Aminu Tambuwal of Sokoto, Muhammed Bello, said Wike donated the money to support the state’s rebuilding efforts of the market, and also to support the victims of the inferno.

Bello said Wike made the pledge when he visited the state to condole with the government and people of the state over the incident.

According to Bello, Wike was shocked and disturbed when he learned about the inferno and when Tambuwal showed him around the scene of the incident.