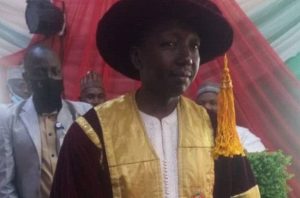 A new Vice-Chancellor has emerged for the Federal University Gusau (FUGUS) in Zamfara State in the person of Professor Muazu Abubakar.

The pro-chancellor and Chairman governing council of the University, Honourable Yissa Ezekiel Emmanuel disclosed on Wednesday that Abubakar emerged out of the 19 professors that contested the position.

He made this known during the formal handing over between the outgoing and incoming VC on Wednesday at the University in Gusau.

Hon. Emmanuel said due process was followed in determining the new VC.

“I appreciate the support of the management for their encouragement on the due processes followed during the selection of the new VC of the institution.”

The pro-chancellor promised not to interfere unduly in the running of the University but charged the new VC to be diligent in the discharge of his duties and work with others to build the institution.

He said: “You will be guided by the Senate and management of the University, I will not also interfere with the activities at all time as I may not be coming all the time.”

Represented by the VC Academics, Professor Balkisu Shinkafi, the outgoing VC Professor Magaji Garba said his administration brought a lot of developments to the University.

“Part of the achievements was developing a five years strategic plan for the University which includes the condition of service and students’ guides,” he noted.

Meanwhile, popular Nollywood actor, Bolanle Ninalowo also called Nino B, has revealed that he constantly tells his daughter, Aliyah that he is not her father.

He added that he always tells her God is the only father while he is just a guardian.

Explaining why he says that, Ninalowo said this is so she can always put God first in anything she does and not rely on human beings.