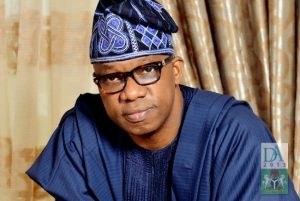 Ogun State Governor, Dapo Abiodun, on Tuesday received five Governors in Abeokuta, Ogun State capital for a peace meeting over the farmer-herders crisis in the state.

The Governors in attendance are, Rotimi Akeredolu of Ondo, Abdullahi Ganduje of Kano, Abubakar Sani Bello of Niger, Abubakar Atiku Bagudu of Kebbi and Bello Matawalle of Zamfara.

The meeting which is being held at the Obas Complex, Okemosan Abeokuta, is aimed at finding a solution to clashes between farmers and herdsmen in the state.

Governor Abiodun while welcoming the governors, traditional rulers, farmers, herders, and community leaders to the event said, “it is important that we gather and find lasting solutions on recent happenings in our dear state, especially as it concerns the coexistence of farmers and herders.”

He wondered why people who have lived together for years are suddenly fighting each other for survival.

According to him, everything took a violent dimension in the last couple of weeks, saying, “We have heard cases of arson, maiming and killings in extreme instances.”

“Our first priority in Ogun State is the safety of lives and property of everyone in our dear State irrespective of the circumstances of their birth or religious leaning.”

Abiodun further stated that a fact-finding team constituted has submitted an interim report to the Security Council of the state for consideration.

“It became evident there are some elements intent on setting our people against one another by whipping up ethnic sentiments.”

“The recent avoidable conflicts left casualties and loss of property on both sides.”

“Those fomenting the crisis are said to be non-residents in our state. Unfortunately, the crisis has been exacerbated by some undesirable elements within and outside the state that whipped up ethnic sentiments.”

“They sneak in at night, wreak havoc and retreat after their evil acts.”

“In whatever form, colour or ethnic group, a criminal is a criminal. We condemn all forms of crimes and criminality, regardless of the ethnicity of the perpetrators.”

Abiodun explained that the presence of other governors cutting across all political parties shows a joint commitment to the peaceful resolution of the conflict and a reflection of the relationship and mutual goodwill he shares with them.

He added that “they are also here because of their indigenes that have lived here for many years peacefully and have accepted to lend their voices to enable peaceful cohabitation.”

In a related development, Governor Seyi Makinde of Oyo State led his Northern counterparts to Shasha Market to assess the wanton destruction of properties at the scene of the clash between Yoruba and Hausa traders.