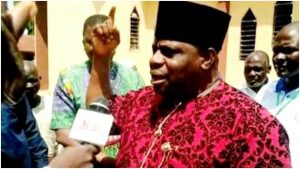 A member of the Peoples Democratic Party (PDP), Haruna Kigbu has dumped the opposition camp to join the All Progressives Congress (APC).

Reports reaching Naija News at this time confirmed that the former lawmaker who represented Lafia/Obi in the Federal House of Representatives left PDP for the ruling party on Saturday, February 6.

Kigbu was said to have decamped with thousands of his followers at a ceremony held in Lafia, Nasarawa State capital on Saturday.

In his remark, while welcoming the new member, Zamfara APC Caretaker Chairman, John Mamman, described the development as “homecoming”.

The caretaker chairman recalled how the Kigbu in his early political career, won an election under the platform of the Congress for Progressive Change (CPC), an APC founding party. He assured that the politician and his loyalists would be accorded equal rights and privileges.

Kigbu expressed his joy for the warm welcome he received by APC leaders and members for accepting him and promised to work for the success of the party. On his part, Yakubu Dogara, a former Speaker of the House of Representatives, said Kigbu was an asset who contributed to Nigeria’s development as a lawmaker.

He, however, advised the leadership of the party to ensure inclusiveness in the conduct of all affairs. Meanwhile, Governor Abdullahi Sule said he was delighted that Kigbu joined the ruling party.

In another news, Governor Rotimi Akeredolu of Ondo State has revealed why the ruling All Progressives Congress would continue to rule the state for a long time.

Speaking at the foundation-laying ceremony of the new APC state secretariat complex in Akure, on Saturday, Akeredolu said the good work his administration has done in the last four years is the reason for his statement, Naija News reports.