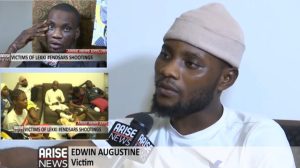 A doctor at Reddington hospital, Babajide Lawson, has revealed that gunshot victims from the Lekki tollgate shooting were brought to the Lekki and Victoria Island branch of the hospital on October 20, 21, and 22, 2020.

Recall that following a curfew declared by the Lagos State Government, operatives of the Nigerian Army stormed the tollgate and attacked peaceful EndSARS protesters with live bullets.

But the Army who initially denied being at the tollgate, despite video evidence, later denied shooting live bullets at the protesters, despite evidence.

Giving his testimony before the Lagos judicial panel on police brutality on Saturday, Dr. Lawson, a trauma and orthopaedic surgeon, claimed that Reddington hospital was overwhelmed with ”mass casualty” from the shooting.

While being cross-examined by Olumide Fusika and Adesina Ogunlana, the two lawyers representing victims of the shooting, Lawson said six persons with varying gunshot wounds were treated at the Victoria Island branch of the hospital.

Fusika had asked: ”Go through the medical reports and confirm if it’s from Reddington and whether they are people you know.”

In his response, Lawson said: “Yes, it’s our medical report. I don’t know them personally but I know them as patients that I treated.”

“Being in charge of trauma, it means that anybody that is involved in traumatic injuries such as accident and gunshots must go through me in both of our locations.

“On that 20th, a lot of the patients were treated at the Lekki office. Later on the night of 20th, I also went to the Lekki office to assess the level of assistance needed in my capacity and I also spoke with the MD of that branch. That night, I transferred a patient to the VI office which is our headquarters where I work from and where he stayed till the 23rd.

“On the first night, there are about six patients that I saw at that night, but as the day goes by, other patients trickled in.”

Fusika asked why a medical report was not issued to one Samuel Oshola, who was also treated at the hospital alongside others who were victims of the Lekki shooting despite presenting evidence of being treated at Reddington.

Lawson responded by saying: “We witnessed what we can call ‘mass casualty’ that overwhelmed our facilities because a lot of people with varying degrees of gunshot wounds were being brought into the hospital for treatment on October 20 and days after it.

“However, if the person is requesting for a report, we would check the treatment files and file a medical report.”

According to TheCable, the names of victims whom Lawson confirmed that he treated personally for gunshot wounds as a result of the Lekki shooting are: Ajogwu Japheth, Philemon Lucky, Samuel Oshola, Nnaji Madem, Bright Osariemen, Damilola Adedayo and Joshua Samuel.