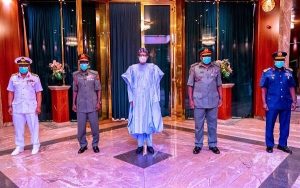 The newly appointed service chiefs have arrived in Maiduguri, the Borno State capital to meet with critical stakeholders to strategize on how to tackle Boko Haram insurgency in the theatre of war.

According to DailyTrust, the Chief of Defence Staff, Major General Leo Irabor led the delegation to arrive at the headquarters of Air Task Force of Operation Lafiya Dole in Maiduguri on Sunday.

A security source revealed that the service chiefs are expected to brainstorming on how to re-strategise approach that will ensure lasting peace in the region.

Recall that President Muhammadu Buhari has written to the Nigerian Senate to confirm the appointment of the newly appointed Service Chiefs.

Naija News reports that this was made known in a statement on Friday by Babajide Omoworare, special adviser to the president on National Assembly Matters.

He revealed that Buhari asked the senate to confirm the appointment of the security nominees in a letter dated January 27.