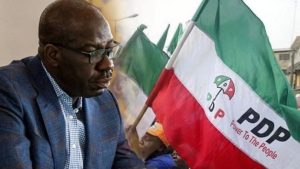 Edo State Chairman of the Peoples Democratic Party (PDP), Dr. Anthony Aziegbemi, has dismissed rumours of a rift between Governor Godwin Obaseki and the leadership of the party in the state.

Naija News reports that Aziegbemi made this known in an interview with newsmen in Benin, the Edo State capital.

The Edo State chairman accused fifth columnists and those who wanted to cause apprehensions and do not wish the party well of been behind the rumours.

Aziegbemi asked PDP stakeholders to be patient with the governor, stressing that Obaseki would carry everyone along.

He said: “In fact, I can say this anywhere: it is a very mutually respected relationship between the party and the government.

“So normally I do not comment on members’ comments. I respect everyone’s opinion. Do I agree or disagree? That is my personal opinion, which I might not wish to air.

“PDP is a very big party. Even in a family of two, three, four or five, you have issues. Am I saying we might not have issues, worries and fears?

“Of course they will be there and my job is to manage those fears. Don’t forget, some of these apprehensions stem from the fact that people have fear.

“That fear can be genuine, it can also be a wrong perception. So my job is to explain to everyone among the critical segment of the party to say this fear you are having is not real and this is why it is not real.

“Once I take out time to explain to the different stakeholders and critical segment of the party I think they are good.

“Governor Obaseki is that kind of person; he will carry everybody along, it might not be everybody at the same time and that is where we need to do the explanation,” Aziegbemi added.