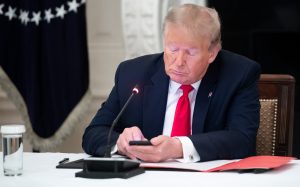 Former United States President, Donald J. Trump, has returned to social media with the relaunch of his old Gab account.

In his first post to the site since 8 January, Trump uploaded his lawyer’s response to demands he testifies at his second impeachment hearing next week.

According to the Independent, while his return to social media was just a repost of his lawyers’ letter, the phrasing carried the ex-president’s characteristic defiance.

“We are in receipt of your latest public relations stunt,” attorneys David Schoen and Bruce Castor Jr wrote.

“Your letter only confirms what is known to everyone: you cannot prove your allegations against the 45th President of the United States, who is now a private citizen. The use of our Constitution to bring a purported impeachment proceeding is much too serious to try to play these games.”

The former president’s lawyers were responding to requests from Congressman Jamie Raskin that Trump appear before or during his impeachment trial, subject to cross-examination, pointing to the testimonies of former presidents Gerald Ford and Bill Clinton while in office.