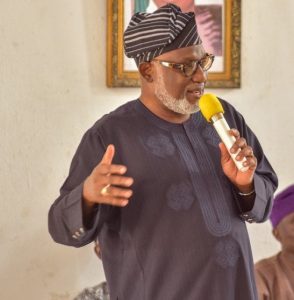 Governor Rotimi Akeredolu of Ondo State has asked only those ready to contribute financially to the All Progressives Congress (APC) to join the party.

He stated this while speaking during a stakeholders’ meeting ahead of the party’s membership registration and revalidation exercise scheduled to commence on Tuesday across the 3009 polling units of the state.

Speaking when receiving members of the committee from the National Secretariat which was led by Murphy Lawal, Akeredolu said no one should be persuaded to join the ruling APC.

He stressed that with members’ financial involvement, smooth running of the party will be hitch-free.

“There’s no basis to register people who will not be committed to the party through financial contributions.

“If you cannot pay dues to the party don’t join our party. If you’re a financial member of the party, you’ll have the same rights with those who pay their dues,” the governor said.

Akeredolu also urged the party to look into the direction of online registration for members in future exercise.

Meanwhile, former Ekiti State Governor, Segun Oni, has declared his intention to contest in the Ekiti 2022 governorship election on the platform of the Peoples Democratic Party (PDP).

Naija News reports that Oni declared his ambition on Monday while unveiling his campaign office in preparation for the election.

Speaking to his supporters, the former PDP National Vice-Chairman, Southwest, stated that the All Progressives Congress will be defeated in the election.

He stated that just like Americans did to President Donald Trump in the recent Presidential poll, Ekiti people will get rid of the APC.