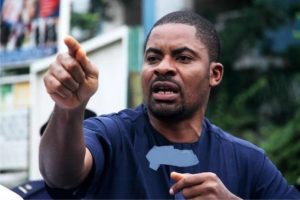 The Convener of Concerned Nigerians, Deji Adeyanju, has condemned former Minister of Aviation, Femi Fani-Kayode, over his alleged defection to the All Progressives Congress, APC.

Naija News had earlier reported that Kogi State Governor, Yahaya Bello, disclosed that Fani-Kayode, has returned to the APC.

Bello disclosed this while speaking to journalists after revalidating his APC membership in the Okene area of the State on Wednesday.

This is coming after the former Minister met with Bello and APC Interim National Chairman, Malam Mai Buni in Abuja.

Adeyanju wondered if Fani-Kayode would now begin to jump from state to state to “to hustle at his old age.”

The activist who took to his Twitter account wrote: “My guy secretly defected. He doesn’t want the world to know about his decamping. He now wants to build bridges -Julius Berger.”

“Will FFK now start going from state to state to visit APC governors or from one ministry to the other to hustle at this old age? Anyways, I wish him well. May he find what he is looking for.”