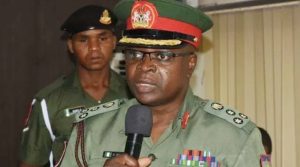 The Director-General of National Youth Service Corps (NYSC), Brigadier General Shuaibu Ibrahim, has denied reports that a top officer died of COVID-19 in the permanent orientation camp in Kano State.

In an interview with Channels Television on Wednesday, Ibrahim said that the top officer who was posted to the camp died at the state isolation center and not in the camp.

He, however, noted that the officer was tested before he entered the camp and was taken to the isolation center after he tested positive for COVID-19.

“It is not true that the officer died in the camp, in line with the PTF and NYSC guidelines all prospective corps members and camp officials that are invited for the orientation exercise were tested. It is mandatory that all must be tested. It is only those that are negative that are allowed into the camp.

“Those that are positive are taken away by the NCDC and state officials for treatment and that was what happened. The officer concerned just like any other NYSC officials underwent the test and when he was positive he was taken by the NCDC to Kano State isolation center and that was where, unfortunately, he passed on, not in the camp,” he said.

Ibrahim noted that there are not NYSC members that are positive inside the camp as they were all tested before entry into the orientation camps.

The NYSC Boss stressed that orientation camps across the country are supervised by the Nigeria Centre for Disease Control (NCDC).

“I have always cleared the air that it is only those that are negative that are allowed into the camp. Those that are positive are taken away by NCDC.

“We were the first agency to give NCDC our modalities for camp re-opening and they looked at it critically along with the PTF and the approval was granted.

“Even I was tested along with my officials. None of our officers died in the camp,” Ibrahim said.