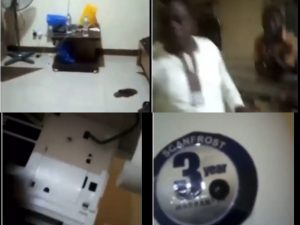 A hotel in Ogun State has been called out for hiding cameras in every room where guests are lodged.

Naija News understands that the cameras were discovered by guests who lodged in the hotel. As shown in the now viral-video on Instagram, the cameras were secretly planted inside ACs in the unnamed hotel.

One of the hotel guests who co-founded the cameras said the cameras must have covered the nakedness of his mother and siblings who also logged in the hotel. The guests discovered no fewer than 5 cameras in the rooms they lodged.

They lamented and ask why cameras should be planted in hotel rooms, thereby denying guests their privacy.

Watch the video below:


Meanwhile, a 52-year-old man has been arrested while allegedly trying to sell off a police car in Osogbo, Osun capital.
Naija News reports that the suspect, Waheed Adewale was nabbed while attempting to get a buyer for the police car reportedly snatched at gunpoint somewhere in Lagos.