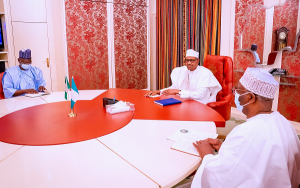 President Muhammadu Buhari led government has revealed its readiness to release $80 million to fight against terrorism and banditry in the northern region of the nation.

The development was revealed by the Foreign Affairs Minister, Geoffrey Onyema, during a virtual summit of the Economic Community of West African States (ECOWAS) Authority on Saturday, January 23, Naija News understands.

Onyema during the meeting which has in attendance Heads of State and Government restated the need for countries to join hands together in the fight against terrorism.

He revealed further that a total of $20 million has already been released to the ECOWAS pool for a security action plan by the Buhari administration to execute the war against terrorism in the region.

He urged member states to pay their voluntary contribution into the fund dedicated to the implementation of the 2020/2024 Action plan.

A part of the statement reads: ”We have already directed the immediate remittance of the sum of $20 million pledged by Nigeria to the pool account of the ECOWAS Action Plan to fight terrorism while the sum of $80 million is to be disbursed for the fight against terrorism in the Northeast and banditry in the Northwest of Nigeria.”

Meanwhile, a chieftain of the All Progressives Congress (APC) and former presidential candidate, Adamu Garba has taken a position on the issue of cattle rearing in Nigeria which has caused a lot of controversies recently.

Garba in a statement on Sunday, made available on his Twitter account, submitted that it doesn’t make sense for cows to be roaming the streets in the 21st century, Naija News reports.