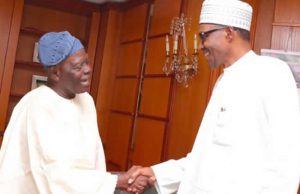 Nigeria President, Muhammadu Buhari, on Saturday congratulated the pioneer Chairman of the All Progressives Congress, Bisi Akande, on his 82nd birthday.

President Buhari’s congratulatory message was release through his Senior Special Assistant on Media and Publicity, Garba Shehu, and titled ‘President Buhari greets Bisi Akande at 82, describes him as big, a strong pillar of democracy’.

The presidential aide in the statement quoted his principal as describing the former Osun State governor as “one of the biggest and strongest pillars of democracy in the country”.

He further stated, “Chief Akande is committed to service of the country and welfare of all citizens.”

“The party he helped to form and lead as the pioneer chairman has benefited tremendously, and continues to benefit from his astute leadership, wisdom and strong democratic convictions.”

Buhari prayed for Akande’s good health and long life so that the elder statesman will continue to be useful to his fatherland and humanity.

In a related development, the National Leader of the All Progressives Congress (APC), Bola Tinubu, has congratulated the former Interim National Chairman of the party, Bisi Akande, on the occasion of his 82nd birthday on Saturday.

In a statement he personally signed on Friday, Tinubu says the former Osun State Governor is one of the great sons of Nigeria. He also described Akande as a principled and selfless leader.