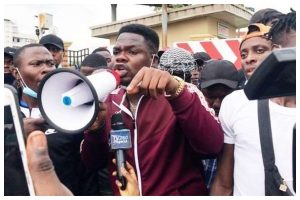 Popular comedian Debo Adebayo, also known as Mr Macaroni, has been arrested by the Nigerian Police at the Lekki toll gate.

In a live Instagram post before his phone and those of other arrested protesters were seized, the comedian lamented that “Lekki is under military rule.”

Mr Macaroni was arrested on Saturday after the police told him “we don’t want you here”.

Debo had joined other protesters at the tollgate to express his dissatisfaction with the decision of the Lagos State Judicial Panel of Inquiry allowing the Lekki Concession Company to reopen the Lekki tollgate.